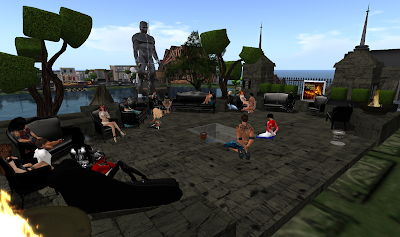 A view of the conversation circle as the trial commenced 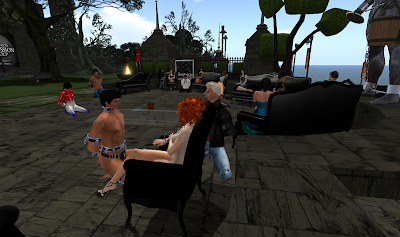 One of our boys here at Dominion, Kilo Hanly, had been ordered to court on a number of occassions but never showed. At our last Trials and Punishments event Dominion Justices Lady Joie Arai and Lady Tapika Tomsen agreed that an impromptu trial should take place next time Kilo was on sim. Lady Joie filed this report:

Re: Trial and sentencing of Kilo Hanly

Last night at apx 1:30am Kilo Hanly arrived on the Dominion Sim as I was sitting in the circle. I recalled that this past Thursday Miss Eva had placed a warrant on his head for the awful crime of sitting on the furniture and then fibbing about it!

I called him to my feet and asked him if he knew he had a warrant for his arrest and was to be tried on site. He indicated that he did not. A general call went out in group chat and the sim began to fill with ladies and boys interested in Kilo’s trial. He gave the feeble excuse of RL getting in the way, so that he was not able to appear in court.

After giving several excuses the boy just refused to take responsibility for his actions, he stated at first that the furniture saved him from a fall, and then that he fell onto the furniture, and then that he barely touched the furniture. He continued to dig his hole and I took pity on him, handing down judgment so that he would be quiet and stop adding to the depth of his charges.

His punishments are to write an apology to Miss Eva for defacing Dominion property and he was also auctioned off for 24 hours to make restitution for the couch Eva had to delete as a result of his actions. The auction happened directly after trial in the Dominion group. He was sold to Miss Raffila Millgrove for the amount of 650$L.

Thank you to Lady Joie for submitting this report and to Lady Maisy for the photos.
Posted by Evangeline Eames at 9:39 PM 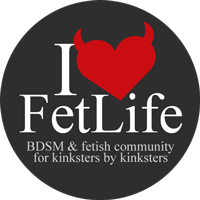